The Meta (formerly Oculus) Quest 2 is worthy of praise and speculation alike. Although there are loads of positive things that can be said about the headset, one critique that people often have is that the built-in audio just isn’t good enough.

In this article, I’ll be telling you whether you can use Bluetooth headphones with the Quest 2 to improve your overall VR audio experience, along with other useful information to help you make the most out of the headset.

The short answer is yes, you can use Bluetooth headphones with Meta Quest 2. Although the headset officially only supports 3.5mm and USB-C headphones, you can also pair and connect your wireless headphones. The downside is that you can expect some audio lag when playing VR games.

Let’s look at this topic in a bit more detail.

Note! I have written about my experience using Apple Airpods with Quest 2 in one of my previous articles. Feel free to check it out!

How To Pair Bluetooth Headphones With the Oculus Quest 2

Officially speaking, the Quest 2 neither says to nor claims to support wireless Bluetooth headphones or such audio connections. The Oculus (Meta) support documentation only says the following about the headphone compatibility:

“Quest 2 supports both 3.5mm headphones, as well as USB-C headphones”

So it seems quite clear that Meta (Facebook) wants you to use a wired connection or trust the in-built sound system. However, this doesn’t mean that your wireless experience isn’t possible! Setting this up isn’t as hard as you might be thinking.

Just follow these steps to pair Bluetooth headphones with the Quest 2:

Just like that, your wireless headphones have been connected to your Quest 2! It’s worth mentioning that, since this isn’t an “official” method, not all wireless headphones will work this way due to compatibility issues. So if you face a problem, don’t be quick to conclude that there’s a problem with your headphones!

Since the method to connect wirelessly is a workaround, it comes with a few downsides that may dampen your VR experience.

I did some testing with a couple of different applications and here’s how the Quest 2 performance was with Bluetooth headphones connected to the headset:

The common denominator in my tests was that the audio was out of sync (1 to 1.5 seconds lag) for all VR games tested. You can watch this occurring in the video below. Even though you could probably get used to it eventually, it was quite annoying and ruined the overall immersion for me personally.

When I did my research for the article, I found that people were also complaining about stuttering in the games.

This was actually not the case in my tests and I only noticed some rare stutters when playing VRChat. However, this also seemed to be the case when Bluetooth headphones were not connected and the stuttering was likely caused by the custom worlds and avatars. So performance-wise, I don’t really have any complaints, and all of the games tested worked without issues.

Noticeably, there weren’t any issues at all when running media applications such as Netflix, Youtube VR or Amazon Prime. Playing local files using a video player also worked well. So if that’s your aim with your wireless headphones then you have nothing to worry about.

However, when it comes to VR games, you should probably prefer either the built-in audio of the Quest 2 or use wired headphones. Believe me, it’s just better this way.

What Else Can You Do?

If you absolutely want and need to use Bluetooth headphones with your Quest 2, there’s a workaround that reportedly gets rid of the lagging audio issue (I have not yet tested this myself).

The process is really quite easy, but if you are unsure and want a step-by-step tutorial, then make sure to watch the Youtube video below.

I am going to end the article with the fact that the effectiveness of using a wired connection should not be overlooked. While the Quest 2 prides itself as a futuristic wireless VR device, Facebook (Meta) still recommends Logitech G333 earphones as the official wired audio solution for your headset.

And why not? Custom-built for the headset, the G333 earbuds provide decent audio quality, a comfortable fit, and a short wire that will not get in your way. Perfect for a getaway into the VR wonderland! 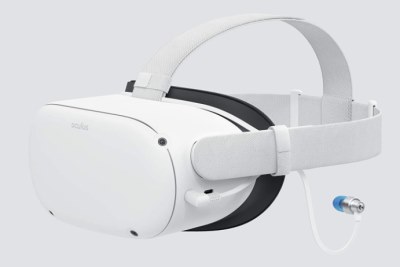 Although the integrated spatial sound system of the Oculus Quest 2 is pretty decent and acceptable for most use cases, sometimes you just want more. Wired audio solutions have proven to work well,...